WHAT is a "Pusher Pump", and why use one?

Joined Nov 13, 2005
·
1,065 Posts
Of necessity, one of the single largest issues of importance for the 24 valve Cummins trucks, is the absolute need to carefully monitor fuel pressure as supplied to the VP-44 injection pump.

That pump has proved to be somewhat sensitive to fuel lubricity, pressure and flow. It is both cooled and lubricated by the flow of fuel thru it - a fact further complicated by the steady decline of diesel lubricity as steady efforts to reduce sulphur content has also adversely affected the lubrication characteristics of our fuel.

A fuel pressure gauge is an absolute MUST for a knowledgeable 24 valve owner concerned about the health of his expensive VP-44. Next in importance, are steps available to enhance the fuel supply to the VP-44 - and one of the best and most used methods, is installation of some form of aftermarket fuel pump - either a substitute pump felt to be better than the OEM fuel pump (lift pump) - or a supplemental (pusher) pump to reinforce and enhance the ability of the OEM pump to do it's job.

Aftermarket pumps such as the FASS, RASP, and the currently popular Walbro are being used, as well as one of several available Carter types that are nearly identical to the stock OEM lift pump also manufactured by Carter.

The focus of this thread, is the use of a Carter 4600 "Pusher pump" as I have installed on my own ‘02 truck. Here's a shot of mine in original form, installed as most feel works best, down on the frame rail as close to the fuel tank as possible:

Mine has gone thru several evolutions to further enhance reliability and operation - those will be covered later. The added pusher pump needs power to operate - and most users prefer to pick off a small amount of current from the existing LP power circuit to power a relay that in turn provides contacts to take voltage direct from the battery to power the added pusher, and not draw added excessive power from the computer controlled primary LP circuit - here's a shot of the common Radio Shack relay with 20 amp contacts that I use:

Some users trying to simply power the added pusher pump directly off an available keyed circuit, quickly discovered that if fuel PSI above about 7PSI is applied to the VP-44 before and during attempts to start the engine, it won't start - due to an over-pressure sensor in the VP-44 that prevents engine starting.

NOW, as to some suggested additions to the pusher pump as seen up above. One potential disadvantage of the added pusher is, if it should fail or stop for any reason, it's possible for it to block fuel flow and starve both the OEM LP and the VP-44 - a potentially serious event!

For that reason, I have devised a homebrew flip-flop valve that functions purely off fuel flow and pressure at the pusher pump - it is closed by system fuel pressure in normal operation, but will open if the pusher fails, and permit fuel flow AROUND the pump if that happens - it looks like this disassembled:

And as assembled on the pusher, ready to mount back on the truck:

It has been tested, and functions perfectly with no need for operator intervention - I built my own, but places like Jegs offer them for about $24 or so.

End result with my setup, is about 23 PSI fuel pressure at idle, and about 16 PSI at cruise, either empty or RV towing: 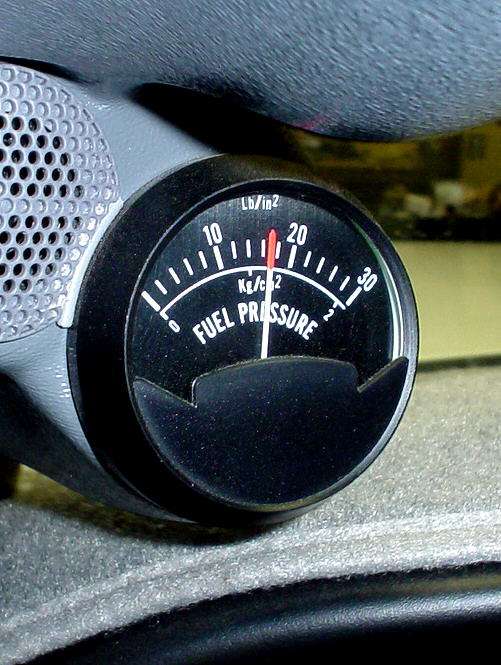 To those who might be critical of the rather wide range of PSI, I might mention my use of a Frantz sub-micron fuel filter in my systen that adds about a 4 PSI drop in full-load pressure due to the added restriction of that filter - I can live with that, since I still have plenty of pressure for my needs - and greatly value the vastly superior purity of fuel supplied to my VP-44.

My pusher setup has been on my truck since new, and has performed flawlessly for about 4 years and 40K miles - there are other good aftermarket setups available as kits - but at just under $100 in total cost at time of original installation, I'm fully satisfied with mine.

Joined Nov 1, 2005
·
384 Posts
Gary, you seem way more knowledgeable than me on this subject. I will let you or someone else explain how flow also plays in to the equation. Hence the Vulcan and similar kits.
D

mrmajestic said:
Gary, you seem way more knowledgeable than me on this subject. I will let you or someone else explain how flow also plays in to the equation. Hence the Vulcan and similar kits.
Click to expand...

This is fairly obvious but, more flow = cooler and happier VP-44. Is that what you are asking? Or am I missing the point of the question?

Joined Jan 10, 2006
·
1,659 Posts
I believe that the reason that DC went from testing fuel pressure to testing flow was so they could pass a huge number of failing lift pumps that would not pass the pressure test. As far as Im concerned, DC did this to save big $ - not to help their customers.
G

Dr. Evil said:
I believe that the reason that DC went from testing fuel pressure to testing flow was so they could pass a huge number of failing lift pumps that would not pass the pressure test. As far as Im concerned, DC did this to save big $ - not to help their customers.
Click to expand...

As long as adequate fuel flow is available right at the VP-44, even at single digit PSI, that's really all that's necessary - the job of the DC supplied LP is only to SUPPLY FUEL to the VP-44, NOT to in any way pressurize the VP - that's the job of the larger and better engineered VP-44 internal vane pump that feeds and pressurizes the individual fuel injection plungers.

It has been pretty well demonstrated and proved that applying vast volumes and pressures of fuel to the VP-44 does NOTHING to improve it's performance, cool it or improve internal lubrication.

All external fuel supplied to the VP-44 IMMEDIATELY faces that internal vane pump, which has positive engagement spring-loaded vanes - we ain't gonna force ANYTHING past that pump - and it rotates in time with the rest of the internals of the VP-44, so only just so much fuel is going to circulate thru the VP, regardless of HOW much you might spend on efforts to crowd more thru it. In fact, excessive pressures might even damage some of the more sensitive seals and control diaphrams...

All the above comments come directly from the Bosch injection pump manual as used by Bosch certified pump rebuilders...

Thats why the 7psi max on my 3rd gen concerned me when I put my gauges on. Running stock , it never drops below 5psi.With the performance setting on the BD pup , it will drop to 4psi when I tromp on it.

Any 3rd gen guys that had simmilar fuel psi reading with the stock lp and have upgraded to an aftermarket , Id love to know what kind of readings your getting.

eflynn1959 said:
Gary, where do you get that flip-flop valve part # at jegs
Click to expand...

The commercial bypass number as supplied in another thread is no longer available - if someone locates a reasonably priced one, please post it here - all the ones I find currently available run about $175 or more - one reason I originally built my own...
1 - 13 of 13 Posts
Join the discussion
Continue with Facebook
Continue with Google
or sign up with email
About this Discussion
12 Replies
6 Participants
Last post:
Gary - K7GLD Nov 16, 2006
Dodge Cummins Diesel Forum
A forum community dedicated to Dodge Cummins Diesel truck owners and enthusiasts. Come join the discussion about reviews, drivetrain swaps, turbos, modifications, classifieds, builds, troubleshooting, maintenance, and more!
Full Forum Listing
Explore Our Forums
3rd Gen. Performance Parts Discussion 3rd Gen. Powertrain 2013-2018 General Discussion 98.5-02 Powertrain 98.5-02 Performance Parts Discussion
Recommended Communities