Some of you may have seen my recent thread: d89: Now with Predator-vision!

After running the block heater for >8 hours, I whipped out my new thermal imager to examine the quality of the prewarming. This was performed at night (no solar/IR heating) and the ambient temperature was 22F. 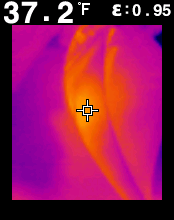 Built-in defrost is a fringe benefit. This is a shot of the base of the windshield on the driver's side. We can observe a temp rise there of about 15F. This roughly aligns with my observation of the defrost feature losing the bulk of it's effectiveness around 15F ambient. 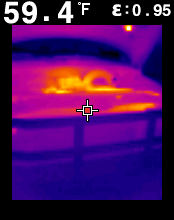 Opening the hood, this is what I saw. 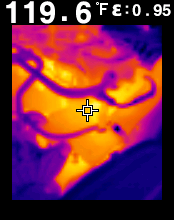 This is the front, passenger side of the engine. Alternator is at lower left, and the heater tube is above the crosshair. Right away, we notice that the 120F of the engine block minus the 22F ambient doesn't align with the previously measured peak rise of 84F. This may be explained by the location of my fan controller's sensor (the object teed into the heater line above the crosshair). Starting from cold, with no pressure in the system, the heater will boil off some coolant until the pressure rises. This coolant vapor will, no doubt, accumulate at the highest point of the system it can travel to. Vapors are poor thermal conductors, so we experienced a false low reading. 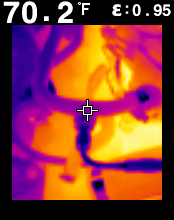 I confirmed this by keying on the truck. Indicated temperature on the controller was 71F. 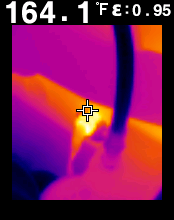 This is the block heater itself. The temperature recorded is of the nut/cord connection. 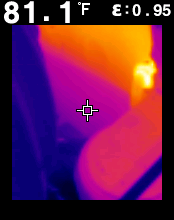 Looking at the side of the block next to the heater, we can see an expectable gradient right at the level of the heater. 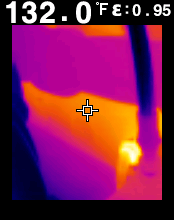 Another shot. This is the hottest area I could find on the engine. 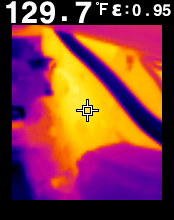 This is the front of the engine block, by the water pump and above the gearcase. 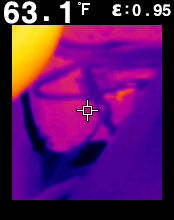 The heat is contained mostly within the engine block itself. We saw in an earlier picture the alternator did not absorb much heat. This picture shows the vacuum pump. 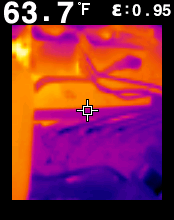 It should be obvious what this is. Temperature of the pump and the fuel line (targeted) were about the same, as one might assume by the similar color.

Another thing that affects cold-weather startability is oil viscosity. I'm not going to do a bunch of math right now to compare the viscosity of my oil at 22F compared to the prewarm temperature, but the more heat the oil absorbs, the thinner it will be, the easier the engine will start, and the higher the quality of initial lubrication will be. This is very important for maximizing the engine's lifespan, as wear rates are extremely high immediately after startup.

Sniping around my axle and steering linkage, I got these two decent shots: 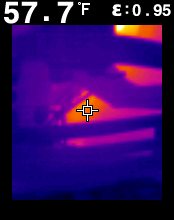 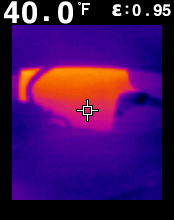 Not tremendously impressive, but the transfer of heat into the sump is going to be very inefficient. The mass of oil is similar to the mass of the coolant (though they have different specific heats, also not going to do that math right now), both are separated with a layer of air which has terrible thermal conductivity, and essentially the only direct path of heat transfer will be conduction through the block and the oil pan itself. We can't really do much about that, except to eliminate as much BTU waste as possible and conserve prewarming heat within the engine. 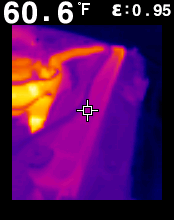 I discovered a substantial loss of heat through the radiator. While the thermostat is closed, the jiggle pin is in the down position with the engine off. This allows convection currents to carry warm coolant into the radiator and the coolant to lose a lot of heat. The upper radiator hose was 96F, the top of the inlet tank was 93F, the top of the outlet tank was 56F. I did not measure the bottom. The natural assumption is that one could enjoy a massive increase in heater effectiveness by installing a valve in this line, leaving it closed except when working on the cooling system. However, this may be unwise as the jiggle pin is also the escape path for coolant vapor created by running the block heater. With that valved off, vapors would build up behind the thermostat, potentially enough to cause an overheat when the engine is warmed to operating temp. Perhaps a normally closed solenoid valve, wired to keyed power is the answer? I may pinch the line off and FLIR the engine again to see if it would be worth the hassle.

Join Date: Nov 2010
Location: Riggins, Idaho
Posts: 682
Thanks: 143
Thanked 68 Times in 63 Posts
iTrader Score: 0 reviews
Once again, off the charts with your analysis dauntless! Thumbs up

Join Date: Oct 2017
Posts: 438
Thanks: 9
Thanked 10 Times in 10 Posts
iTrader Score: 0 reviews
I have enjoyed using an APP to open my garage with my smart phone. Works great when youre on the bike. Using a WiFi control to turn an outlet on would be a convenience for those of us in the frozen north and dont have a schedule to know when to plug the truck in. Looks like exterior controllers are between $30 and $100s .

Join Date: Nov 2014
Location: Deer Park, WA
Posts: 4,809
Thanks: 163
Thanked 811 Times in 715 Posts
Garage
iTrader Score: 0 reviews
I would be curious as to the difference in temps according to the FLIR in a 3 hour setting vs the 8 hour setting, but understand that might take a minute for you to have the time to check that
2018 Ram 3500 Limited - Crew Cab Long Box 4x4 SRW Stock at the moment, but that will change
Make your puddle lights great again!
SUPPORT SITE VENDORS, THEY MAKE ALL THIS POSSIBLE
HELP ME UPDATE MY IMAGES, IF YOU SEE A BROKEN IMAGE LINK, SEND ME A PRIVATE MESSAGE SO I CAN UPDATE THE IMAGE TO A NEW HOSTING SITE
Loki223 is online now
Quote Quick Reply
post #18 of 25 (permalink) Old 01-18-2018, 05:10 PM
Jureksoccer
Newbie

Join Date: Nov 2014
Location: Deer Park, WA
Posts: 4,809
Thanks: 163
Thanked 811 Times in 715 Posts
Garage
iTrader Score: 0 reviews
@dauntless89 any chance you can get your pics back up on post 14, they showed a lot and are now gone from my view
2018 Ram 3500 Limited - Crew Cab Long Box 4x4 SRW Stock at the moment, but that will change
Make your puddle lights great again!
SUPPORT SITE VENDORS, THEY MAKE ALL THIS POSSIBLE
HELP ME UPDATE MY IMAGES, IF YOU SEE A BROKEN IMAGE LINK, SEND ME A PRIVATE MESSAGE SO I CAN UPDATE THE IMAGE TO A NEW HOSTING SITE
Loki223 is online now
Quote Quick Reply
post #20 of 25 (permalink) Old 10-31-2018, 11:58 AM Thread Starter
dauntless89
The Uppity 12v Guy

2018 Ram 3500 Limited - Crew Cab Long Box 4x4 SRW Stock at the moment, but that will change
Make your puddle lights great again!
SUPPORT SITE VENDORS, THEY MAKE ALL THIS POSSIBLE
HELP ME UPDATE MY IMAGES, IF YOU SEE A BROKEN IMAGE LINK, SEND ME A PRIVATE MESSAGE SO I CAN UPDATE THE IMAGE TO A NEW HOSTING SITE
Loki223 is online now
Quote Quick Reply
post #22 of 25 (permalink) Old 10-31-2018, 02:13 PM
DJRobinson
Diesel Freak

Looks like I'll be picking up a timer and a couple of new cords for my trucks.

A lot has happened in the last year. To bring everyone up to speed, I didn't get my old engine (12v 5.9) done in time to do any thermal studies on it last winter. The truck ended up sitting most of the summer as well and I didn't get a chance to actually fire it up until mid-August. The cam failed almost immediately and trashed the cam tunnel. My options being what they were, I opted to start from scratch and build a P-pumped 6.7 12v. The CR blocks use only the thread-in style of block heater (also found on the 12v and 24v STORM blocks) and due to the internal geometry of the block casting, the freeze-plug style heaters are a no-go on the 6.7. I did choose to thread the coolant freeze plugs on the driver's side of the block, and there's a possibility I can get a second thread-in heater in one of those ports, but most likely I won't be able to retain dual heaters.

When I built the Hamilton 12v head for the original motor, I moved the custom temp sensor port out of the coolant tube and into the front of the head, close to the thermostat. This will eliminate the false-low readings, and because I'm using this 12v Hamilton head again on the new engine, I'll still be able to experiment with selectively blocking the vent hose like I was talking about to keep heat in the engine.

I've got most of the big pieces of this build, just waiting on a crank to get back from balancing and then I can start putting it together. I'm planning to have the engine done and in the truck by Thanksgiving. Even with the predictable amount of snafus, I should have plenty of time this winter to play with the thermal imager.
Loki223 likes this.
'95 2500 ECLB 4x4, 334k and paused due to epic transformation in progress.
dauntless89 is online now
Quote Quick Reply
post #24 of 25 (permalink) Old 01-08-2020, 10:18 AM
24hrsparkey
Diesel Head


Join Date: Sep 2011
Location: Parkton, MD.
Posts: 3,560
Thanks: 1,304
Thanked 284 Times in 245 Posts
iTrader Score: 0 reviews
Quote:
Originally Posted by Quest View Post
Just a quick question regarding the operation of the heating element it self.
I was told that it operates in a similar fashion as a water heater element, with the major different being that there is not a thermostat option to regulate the temp ( pre set op temp for our heaters being F140ish?).
So, when the element reaches the pre set temp, it shuts off.
If that is the case, when we plug our trucks overnight ( let's say 8 hrs), if the element cycles ON & OFF, is not really drawing that much current.
So, does the heating element cycles ON & OFF? if that's the case it costs a lot less than expected to prewarm our trucks.
Yes the block heater element itself is very simm to a home electric water heater element .
But
Home water heater has a thermostat .
Truck block heater No thermostat . Its always on while plugged in. Hence using a timer to control electric consumption .