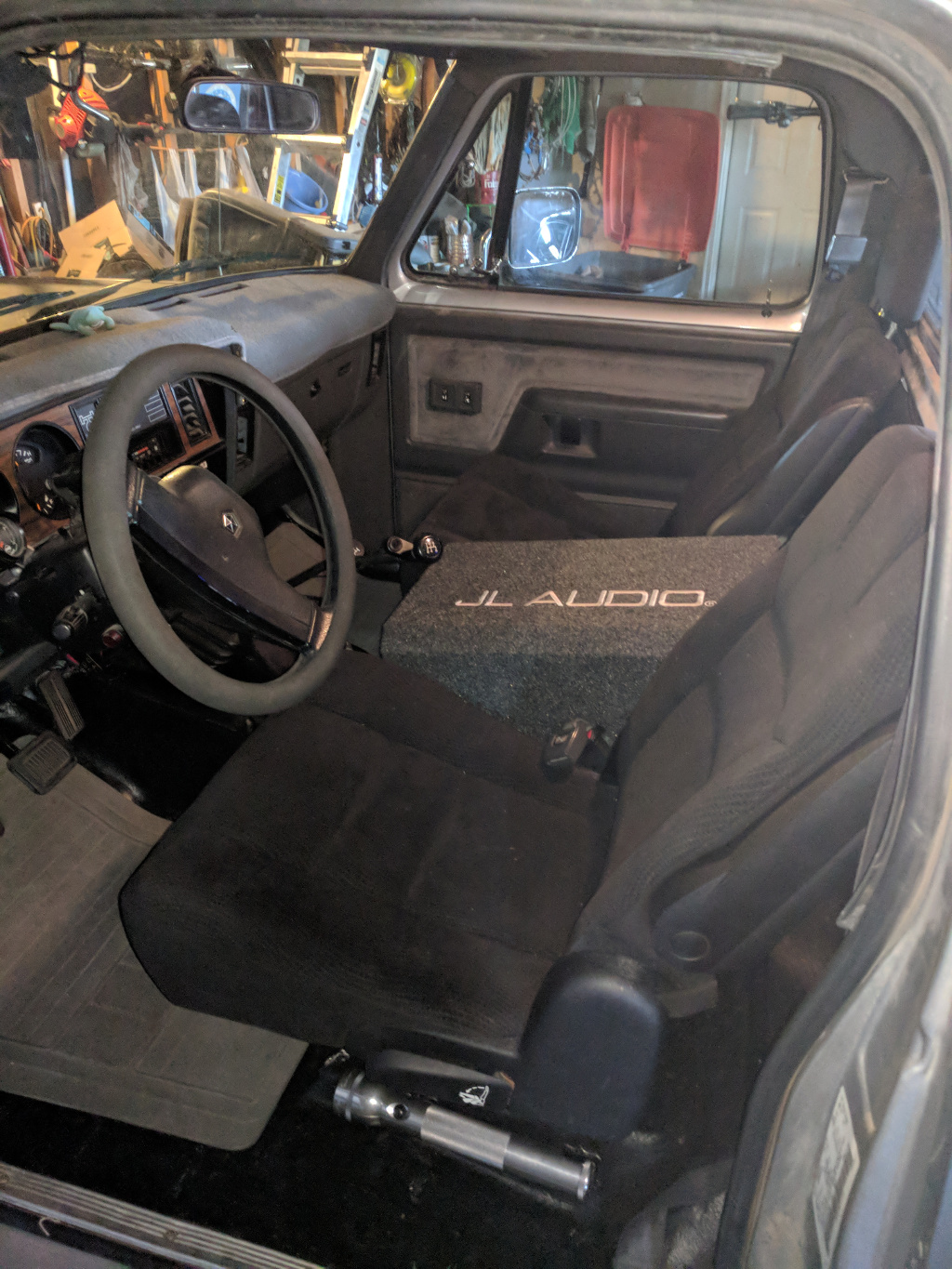 After $120 in late fees for both the truck and trailer registrations, my prized 1st Gen saw the road again yesterday for the first time in quite awhile. I almost forgot how much fun the CTD is to drive, after this project took nearly 3 years from the time it started when thieves broke in, stole the subwoofer, driver's door and trashed the interior attempting to dissassemble it before they decided to be on their way. So after the initial shock wore off I saw an opportunity to upgrade the seating and re-do some other stuff as well. A decent door turned up on eBay after a few searches. Progress was worse than slow. It was low priority while other things took up my time as I spent 2 years gathering parts and mulling over exactly what I was going to do with it before really getting started last winter.

Seats were the other big thing. They needed to be smallish, black buckets. I found another eBay'er doing van conversions with 3rd row take-outs that fit the requirement. Fabricating mounts for those was by far the most work involved. I'd like to know how Dodge fastened the captains chairs into the club cabs, because there's nothing but sheet metal between the standard cab frame rails. The solution I developed was mounting brackets sleeved into newly fabricated floor supports. Set screws lock them in and can be pulled for easy, quick removal, or new holes can be drilled allowing them to be raised or lowered by up to 2 inches either way. The seating position is canted back a bit now, as opposed to the bolt-upright stock bench. They even recline about halfway with the sliders full forward. Best part is just about anything is more comfortable than a 1st Gen Dodge bench!

Other items addressed were the headliner, floor and sound. I've always been a function-over-form guy on a tight budget, so it's DIY first, buy parts 2nd. Aftermarket headliner and carpet is stupid expensive for what you get, so the headliner got a strip-down re-furb consisting of a few coats of bedliner with a color coat on top. Welding tasks involved closing the floor assembly points, seat supports and mounting studs for the sub, trans temp gauge and a cup-holder/storage compartment. The original plastic tray behind the seat was nixed in favor of some light steel tubing, also welded directly to the floor. Then the floor got 10 coats of el-cheapo Rustoleum bed liner. Don't do that if you are in a hurry. The floor coating process ocurred over a three month period. It takes at least a week to cure each coat and the out-gassing is smelly and toxic.

Then a whole new sound system went in, with a JL HO-110 sub mounted between the seats. Good luck stealing that, because it's going to take awhile to get it out next time. There is a new Kenwood digital head unit, amps and Alpine 6x9 coax's replacing the stockers in the back corners, mounted in proper enclosures. It's got respectable output both under the hood and in the cab now.

I still have to adapt the door interior panel I found for it and fabricate that cup-holder/storage box to be mounted between the sub and shifters. It will be a sturdy, lockable metal unit designed for storing the sidearm when not directly attched to me. But the only thing it really needs at this point is the drivers door trim. Anybody have one they don't want? That like-new bench seat you can see a snippet of in the top-right corner of the back window pic won't be around much longer, in case anybody wants it.

Here's links to the progress reports I posted on my blog along the way: