Join Date: Jul 2014
Location: Southeast TX
Posts: 13,065
Thanks: 18
Thanked 2,220 Times in 1,655 Posts
iTrader Score: 0 reviews
New radiator and intercooler, THE HARD WAY...
Rolling up the interstate thursday afternoon, was in the left lane about to pass a couple of 18 wheelers moving pretty slow.

Just as I get to the first truck, he suddenly changes lanes over in front of me and hits his brakes, apparently to allow the other truck ahead of him to move over for another truck pulling out off the shoulder.

The guy whipped over so fast and hit his brakes, that I couldn't slow down in time and I hit him hard.

I pulled off onto the inside shoulder and median and stopped.

I didn't see any company name on the back of the 18 wheeler trailer and no way I could get the license plate number.

The airbags didn't deploy, and I hit the steering wheel hard into my chest, still hurts!!!

I guess this is partly my fault, probably should have slowed down when I came up on the slower moving trucks, but didn't expect the bonehead to suddenly swerve over in front of me, he didn't signal either.

So, crash bent the radiator support back, pushing the radiator into the fan clutch scraping holes in it, bumper pushed into the intercooler ripping a hole in it. Tweaked the upper engine compartment frame, front fenders, cracked headlights, bent the a/c condenser, broke or bent all kinds of mounts, bent and pushed back the fenders, trashed the hood.

State cops came out, took my statement, but without any info on the 18 wheeler, there wasn't much they could do about him, he was long gone.

The wrecker that came out and hauled my truck off turned out to be from a body shop at the closest town. Turned out to be a great place with a bunch of great friendly employees. They offered, of course, to do the whole repair job for me, but it would have taken them 10 days or so, having to have parts shipped in and what not. What I had them do was just get the truck driveable, so they pulled it apart, literally PULLED IT APART with their frame machine to get the radiator and intercooler out, found both those parts and some of the supporting parts, at a RAM dealer one town over from them, and got them installed and the truck back in driveable form in just one day. Great job they did, saved me from being stuck there for days.

I was on my way to get a trailer when this happened, didn't want to lose out on that, so after they got my truck driveable, I went ahead and drove on up and picked up the trailer and hauled it back home. ZERO ISSUES with driving it, even with the front end smashed.

New radiator is great, truck hasn't run this cool with a trailer on it since before the water pump crapped out on it. Never topped 200 even in 93 degree heat and a big head wind coming back through arkansas. Truck was cool, I was sweating my hiney off with no a/c! 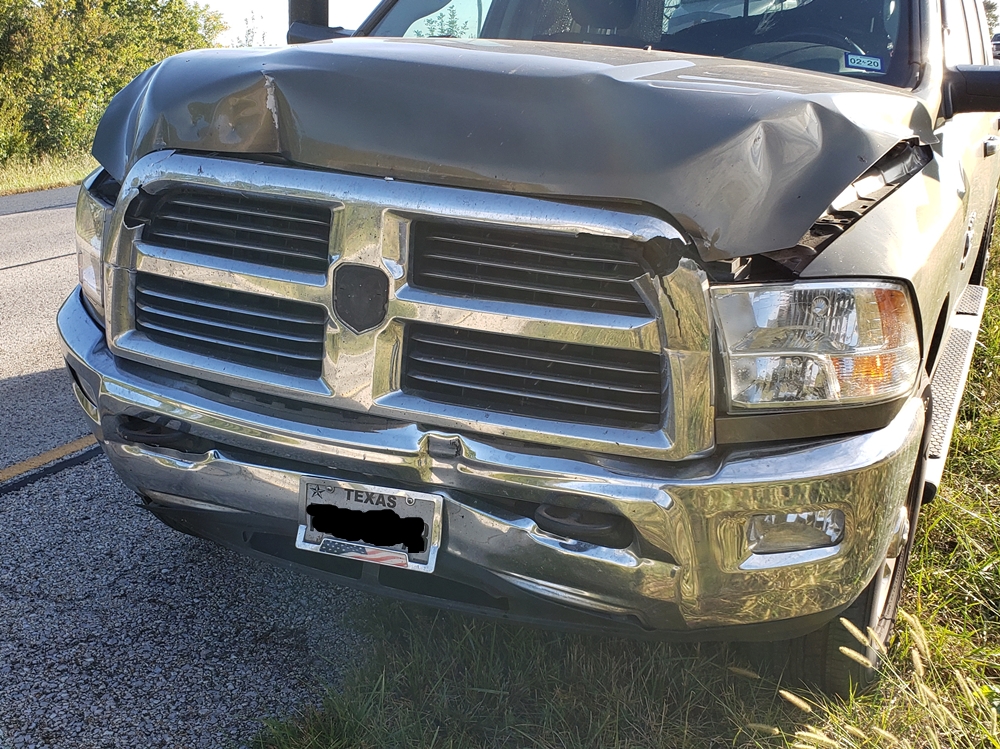 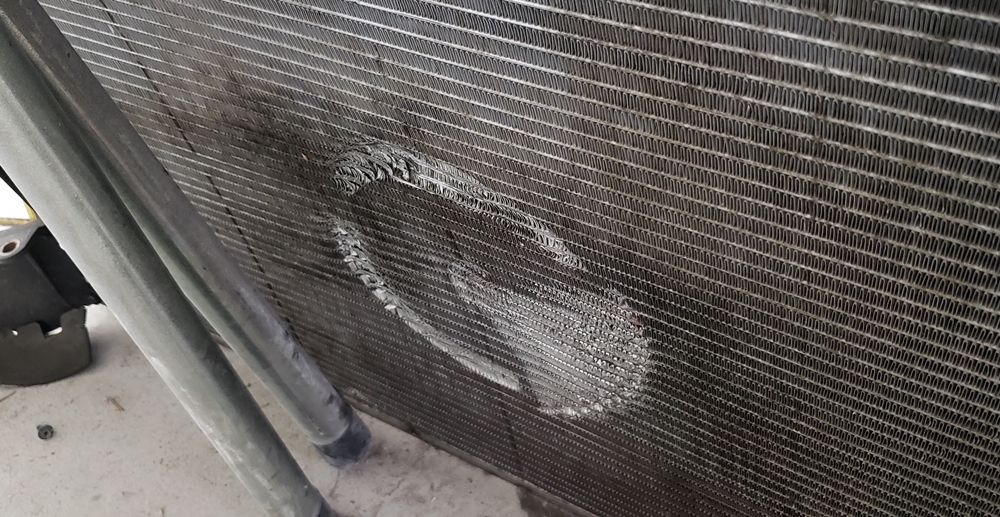 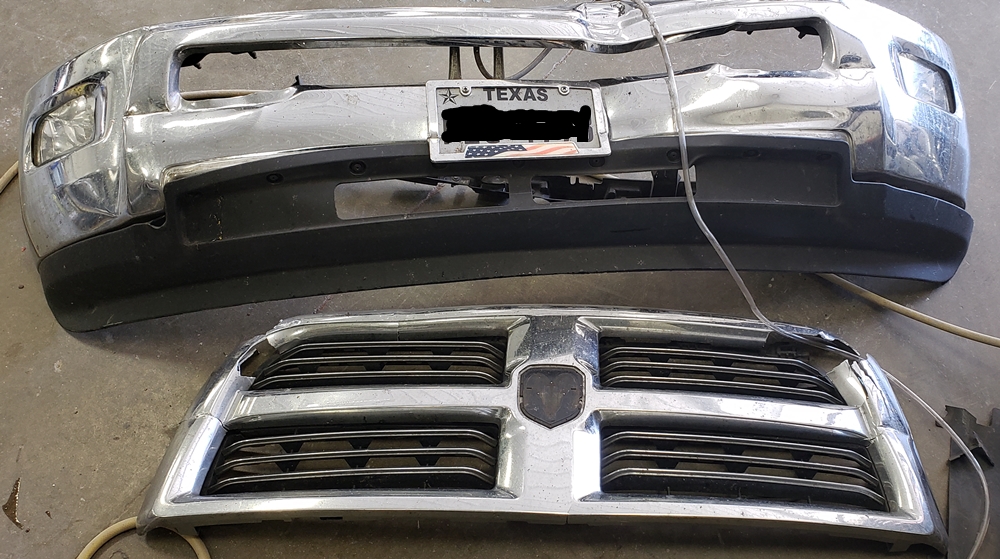 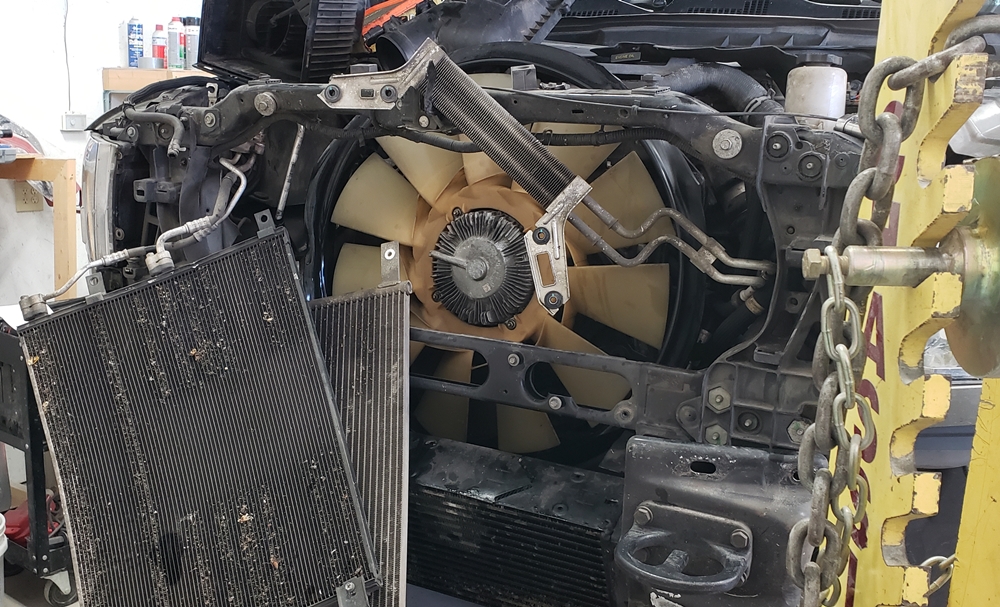 Join Date: Jun 2009
Location: Wichita Falls, TX
Posts: 2,799
Thanks: 69
Thanked 359 Times in 293 Posts
Garage
iTrader Score: 5 reviews
Bummer man. Sorry to hear it. Would have been nice if you had a camera recording.
El Pozzinator likes this.

good idea blacking out the plate number, someone might want to steal a wrecked truck with 400k miles on it. LOL.
Well, insurance has already paid for the emergency repairs to get me back on the road, so I guess they will pay for the rest of the repairs.

As to blacking out the plate number, people to do lots of stupid stuff with your info when they find it online, figure best not to dangle it out there, not make it too easy for those idiots.
cumminsturbofreak, URDiesel, azjohnnyo and 5 others like this.
2015 RAM 2500 LoneStar Mega Cab CTD 2WD Air Ride PRAIRIE PEARLCOAT 02/09/2015
CCV reset/seatbelt chime disable https://www.cumminsforum.com/forum/2...tml?highlight=
Ltngdrvr is online now
Quote Quick Reply
post #5 of 78 (permalink) Old 10-06-2019, 02:28 PM
nick00less
Diesel Head

Join Date: Feb 2017
Location: southernIdaho
Posts: 154
Thanks: 26
Thanked 18 Times in 18 Posts
Garage
iTrader Score: 0 reviews
Wild..... Glad it wasn't ANY worse for you, man. You're a dedicated fellow to continue with the job!

I guess it's been a few days, but please pay close attention to post-traumatic injury...

Join Date: Nov 2011
Location: Naples, Florida
Posts: 652
Thanks: 20
Thanked 68 Times in 51 Posts
iTrader Score: 0 reviews
Good luck with the repairs. There is a reason I have a Rexing dash cam in my truck, and I recommend you to install one as well.

This is the one I have:
Amazon

Join Date: Oct 2012
Location: Batten Roodje
Posts: 2,811
Thanks: 158
Thanked 371 Times in 330 Posts
Garage
iTrader Score: 0 reviews
Id be willing to bet he did feel getting rear ended by a big pickup and just kept going specifically due to dash cams. Woulda shown he cut you off without signaling.

I had a case a few months ago where a gravel truck hit a pedestrian, pulled over, realigned his headlight, looked around for traffic cameras, talked with another trucker who pulled over as well, and they both got in and left. Nobody called 911. Oops! Class-8 dealer / service center had a camera covering the lobby and caught enough to see the DOT numbers.

Most of them are consummate professionals, but some are straight up cannonballers whove taken to driving like distracted kamikaze soccer moms.

Glad youre ok and your office is still operational.

Join Date: Jan 2018
Location: Alabama
Posts: 343
Thanks: 12
Thanked 23 Times in 23 Posts
iTrader Score: 0 reviews
Just glad you where able to come out of it with out serious injuries,

Join Date: Oct 2017
Location: SW Florida
Posts: 1,494
Thanks: 97
Thanked 109 Times in 99 Posts
iTrader Score: 0 reviews
Sorry about your truck but the important thing is you weren't injured. That's what counts.

As to the Semi? Nothing to do about that. You hit him in the arse, I assume?